Foreign and Danish companies praise TV 2 NEWS for its role in great advances in the development of news production.

Even if TV 2 NEWS is a small channel in a small European country, TV 2’s Danish news channel is widely known abroad. This is due to the fact that from the very first day TV 2 NEWS has been at the forefront of developing news production granting best value for money when it comes to providing quality-news-TV. And this has been noticed internationally.

- TV 2 NEWS has proven several time the channel is a step ahead in terms of technology and production concepts. For this reason we definitively consider TV 2 NEWS as a key partner. The continuous discussion between our technical teams accelerates our product innovation by sharing our vision and new ideas that will surely become standards in the next future, says Erwan GASC, who is the CEO at AVIWEST – a company that develops live-transmission equipment.

He is backed by Richard Rees, CEO at the company Quicklink, which is also a supplier of technology for broadcasting live-TV.

- TV 2 NEWS is an innovator of broadcast services. TV 2 has always been at the forefront of News Gathering leading the world by embracing new technology to create innovative productions. Due to their forward thinking they have led the world, other larger Corporations have even looked to them to see what they are doing and replicated what they have done, he says.

- TV 2 NEWS is a modern, fresh, bright and vibrant TV news station. TV 2 is technologically advanced and has great digital platforms and is a true innovator. TV 2 is a great partner for us. Always tackling the big stories in and outside of Denmark professional and smart.

- TV 2 in Denmark challenges us to be more innovative. As head of the GMS department in the Americas, I found during the past year that TV 2 has required a more bespoke service. I do use TV 2 as the standard of where we need to be in 2017. I hope to work more closely with TV 2 technology next year to better understand what the industry wide broadcast service requirements will be in the future, says Susan Henderson.

BBC’s Head of International Bureaux, Sarah Ward-Lilley, knows TV 2 NEWS both from her work at BBC and the European public service TV-cooperation, and in her opinion the words ”innovation, fresh thinking and energy” characterize TV 2 NEWS.

- Keen and share innovation and good ideas with European colleagues – generous with expertise and eager to learn from others. TV 2 NEWS was early adopters of going live and staying live, going with the flow for breaking news, says Sarah Ward-Lilley. 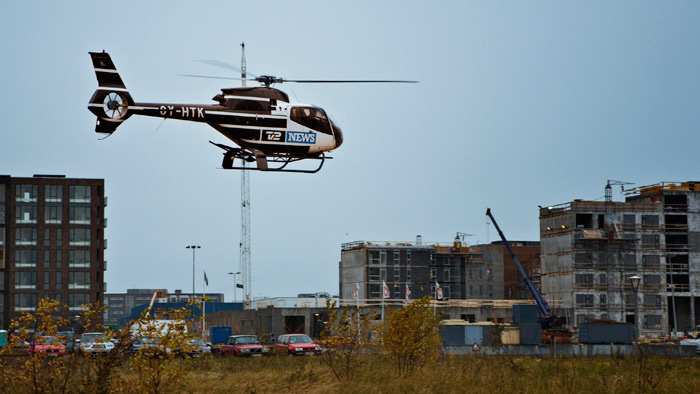 TV 2 NEWS had a working helicopter team from the beginning in 2006. (Photo: Anders Elgaard / TV 2)

Innovative from the start – and in close cooperation with TV 2 Norway
TV 2 NEWS’ innovative course was set even before the premiere in 2006, when TV 2 NEWS went on air in just six months – with rented equipment and an intermediate address in Copenhagen.

When NEWS became a great success, which was even noted internationally, a.o. it is due to the automatized operation where Mosart-software became a central component. However, when the NEWS-project was designed there was no Mosart and not even a firm behind the software. But the technical department at TV 2 and the team behind the NEWS-project knew the creator of Mosart, Mads Grønbæk, who had tested a setup at TV 2 Norway in Bergen. And the people at TV 2 Denmark believed in the idea.

- During a meeting between Nordic news editors in the mid-00’s there was a lot of talk of creating 24 hour news channels in the Nordic countries. At the annual meeting in May 2006, Michael Dyrby from TV 2 Denmark said that funding for a news channel was in place and that it would go on air in December. Nobody believed that it could be done in such a short time but when Kjell Øvre Helland – the Norwegian news editor at the time – also suggested that TV 2 Norway would start a news channel within a year, a competition of sorts broke out to go on air first, Mads Grønbæk says.

TV 2 NEWS went on air 1 December 2006 while Nyhetskanalen in Norway had its first broadcast a month and half later on 15 January, 2007.

- Every year, the TV 2 NEWS team in Denmark has impressed us with innovative studio productions and by being present at all important news events. It’s a pleasure having an older brother this energetic and virile, says Håvard Myklebust, CTO at TV 2 Norway.

According to Mads Grønbæk, in 2006 it was revolutionary to produce news with an automation system and an entirely new workflow was required in the production.

- During the first few years, people from all over Europe visited TV 2 News to see how we produced news in Copenhagen. When BBC moved productions to central London, they used TV 2 News as a model. German N24, ARD, Sky, Swedish TV4 and SVT, as well as many others came to see and hear about TV 2 News’ 2 hour news production, Mads Grønbæk explains. 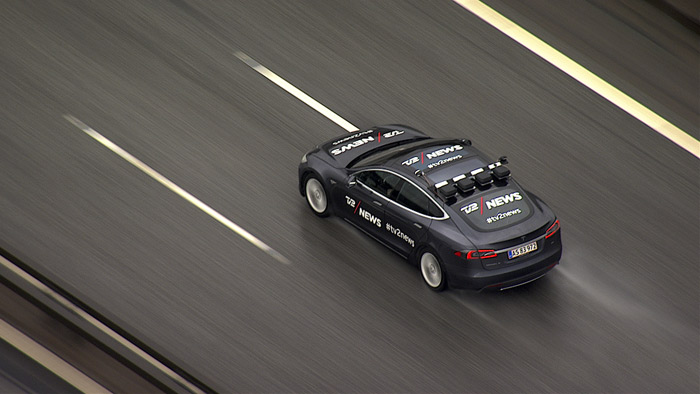 Live-broadcasts via 4G-network
TV 2 NEWS has been at the forefront in a range of other fields. Not before TV 2 NEWS did a news studio exclusively contain remote controlled cameras – even ceiling mounted cameras. The company Studios projected this part which later spread to other news studios.

NEWS solved challenges with incoming light from windows in an innovative way which since was developed into a product that is marketed and sold at TV-fairs. When TV 2 NEWS brought in a helicopter team as a regular part of the TV-news news room, this too was a first in Northern Europe.

Later on, TV 2 NEWS was very first in the world to broadcast live via 4G-network, which at the time was very new, in cooperation with various tele-companies and operators. And precisely the 4G-live-technique has since been developed dramatically by TV 2 NEWS – a.o. in connection with live TV-productions in NEWS’ electric car which was also noticed internationally:

- Our cooperation with TV 2 NEWS on the very innovative “The Challenge” project where a mobile live production studio was installed in a Tesla car was a great opportunity for us to broaden the perimeter of the traditional use of our video transmission system. TV 2 NEWS has definitively made a mark in relation to news production and innovation of news production. The example of the “Challenge” is very significant for us as this project dramatically revolutionized both the technical aspects and the editorial content of news production. Be part of this adventure has helped us to imagine new innovative technical concepts based on our technology that have to be integrated in our product road maps, says Erwan GASC, AVIWEST.

Co-operation with BBC and CNN
TV 2 NEWS has frequently had meetings with big international television companies like BBC and CNN to discuss co-operation and innovation.

- It often turned out that we at TV 2 and TV 2 NEWS had more experience and successful operations, among others live broadcast from photographers stationed abroad than the big television companies. Our co-operation has continued, and there has been a lot of inspiration back and forth - but maybe not quite like the parties had imagined, says Morten Brandstrup, head of news technology at TV 2 NEWS.

The Danish branch of Ericsson has been a close business partner to TV 2 NEWS and together the parties have won among others an international innovation award.

- In regard to its size TV 2 NEWS has gotten an enormous amount of attention from abroad in relation to how the channel uses new technology. I have participated in several international seminars where people are clearly paying attention to what TV 2 NEWS is doing. My impression is that TV 2 NEWS despite a limited budget has acted as a catalyst for innovation, where the driving force has been better workflow, greater mobility and the use of standard equipment, says Lars Nielsen, Head of Technology in Customer Unit Industry & Society at Ericsson.

TV 2s travelling photographers are being noticed
Another business partner is the Danish founded and internationally operating company Cobham SATCOM, which develops and produces satellite equipment used by broadcasters all over the world.

- It has been great for us having TV 2 NEWS in our backyard. TV 2 NEWS’ team of travelling photographers was close to the development of our EXPLORER 710 BGAN-terminal, and a lot of things were implemented as a direct result of this co-operation. The same goes for our EXPLORER 8100 VSAT, where our engineer has benefited enormously from having direct contact with the users at NEWS, says Morten Rishøj, Director of Product Management - Land Mobile BU at Cobham SATCOM, and continues:

- TV 2's team of travelling photographers has been extremely good at integrating our satellite technology in TV's solutions and broadcasting live from even the strangest locations. I remember an example where TV 2 photographer Thøger Andersen ten minutes after landing in Ukraine established a live-feed to TV 2 Nyhederne via one of our terminals. Any other solution would have taken much longer to set up.

- People are noticing TV 2 NEWS because we are able to broadcast live from where things are happening – not from behind the row of broadcasters’ SNG vehicles, at a distance from the actual events. Furthermore, TV 2 NEWS has been in the lead of the movement toward IP-based television production, Morten Rishøj states.